Today was Holly’s vet appointment to followup on her last chemo before starting metronomics.  Holly’s been a little off lately (I’m hoping it’s been mostly due to the heat).  She can’t walk very far without taking a rest.  The vet decided to do her next set of x-rays a few weeks early to be sure something hadn’t happened since she whimpered when he examined one of her front paws, and she yelped last night when someone was petting her.  But GOOD NEWS!  All of her films were clear – chest, pelvis, hips!  (The oncologist had said that since her tumor was at the head of her femur she wouldn’t be surprised to see the cancer reappear in her hip at some point.  So that’s why they were interested in her hips.)  So Holly’s Jolly and so are we!

Anyway, we are celebrating here with ice cream and cheese!  (Makes me wonder if I should try making cheese ice cream? nah – sounds too gross!)

And Zuzu is not bugging Holly as much lately – and Holly is beginning to enjoy seeing Zuzu.  Here they are today… 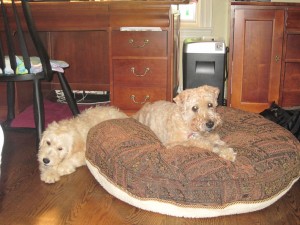 Holly is queen of her Costco pillow.  And Zuzu is slowly learning her manners. 🙂